A Show of Hands is an extensive photographic study of the hands of Britain by the photographer Tim Booth, who has turned images of people’s hands into an alternative form of portraiture.

Hands that have built bridges, farmed fields, conducted orchestras, dug graves, fished, rowed, modelled, acted, comforted and fed. From the graceful gesture of a ballerina, to the hammer blow of a boxer, these hands all have a story to tell. Some have become famous for their artistry, skill and dexterity, others, no less important, through strength, endeavour and toil, bear the scars of a hard and industrious life.

The project sets out to explore the concept of a different kind of portraiture. Faces trigger immediate responses from the viewer, we are all hard-wired to lock into the eyes, nose and mouth of a face, and are sub-consciously attracted or repelled by the configuration. Clouded by pre-conceptions and biological reaction, the face almost becomes a barrier to seeing the person, especially if their face is recognisable. Focusing just on the hands puts all the subjects on even ground, and forces the viewer to look beyond the expected and see, perhaps for the first time, a more approachable and everyday humanity in the sitter.

“After a while it feels like you’re looking at faces.” says Mike Lindup. Keyboard player with Level 42.

How do you approach each subject?

“I always have one or two ideas in my head as to what I would like to achieve with each subject’s hands, but invariably they change when I start to shoot. The range of movement people have with their hands is enormously diverse, and whilst I can imagine the shape I’d like to capture, more often than not my subject’s hands simply won’t fall naturally into the position I have imagined.”

“I shoot all the images in natural light wherever is convenient for the subject, and mostly in under half an hour, so I’m somewhat constrained by my self-imposed remit. The original idea I have in my head for each shot is frequently too complicated, or requires very specific conditions that naturally are never actually under my control. Because of that I more often than not have to improvise, and just go with whatever happens, whether it’s sunny, cloudy, raining, or worst of all blowing a gale.”

I try to keep my kit to a minimum, partly because I have to lug it about, but also I don’t want to turn up on someone’s doorstep with too much excess baggage and spend precious time mucking about with it. I usually restrict myself to a couple of reflectors, a much used large sheet of black velvet and my camera, lenses and tripod. 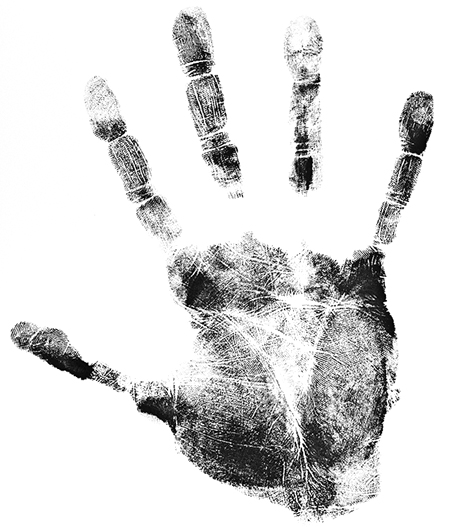 The exception to the rule.
Photographing Tony, or rather his hand-print, was probably my most enjoyable shoot of the project. We met on a summer’s day in his delightful garden in the woods in Surrey. Much to my surprise he and his wife had laid on a delicious lunch on the lawn and we sat and chatted in the sunshine while he enthused about the project. My childhood memories of Tony and Vision On had always been of Morph of course, but also his finger painting, so it seemed natural to me that instead of photographing his hands, we should make a handprint. So we spent the afternoon in his studio rolling ink on his palm and trying to get the perfect print for me to shoot. It’s a diversion from the project in one way, but as a ‘portrait’ of Tony I’m very fond of it, as I was of him. Tony Hart was a lovely man, and is much missed.

The ‘Hit List’ list of hands that would fit the project is almost endless, but below is an idea of the sort of trades and crafts I have either already captured, or hope to in the near future. There are of course numerous omissions, and a few ambiguities – all ideas and willing subjects will be gratefully received! The Collection on the site shows just 47 of the hands I have shot so far, the full collection will be on view in an exhibition in London in 2014, and of course in the book A Show of Hands which will be be available by the beginning of next year. I have where possible tried to find people who have been doing whatever it is they do for a long time, or are simply at the top of their game. Where possible each portrait is accompanied by a short biography of the hands, and if I can squeeze it out of them, a quote from the subject. All my subjects are British. It would be nice to have international subjects, but that’s for another day.

This project would not have been possible without the help and co-operation of an ever growing list of people. From the subjects themselves, to numerous friends and friends of friends, assistants, P.A’s, agents and all manner of people who’ve put me in touch with potential subjects, and come up with suggestions and advice. This acknowledgements list is by no means complete, is not in any order of importance, and I will of course add to it as time passes. If you’re on the list and would like me to link to a particular website, then please do let me know.