One afternoon in May 1996 I popped in on my 95 year old grandmother for our weekly chat and a catch-up. She was as usual sitting in her garden, feet wrapped in plastic bags to keep out the damp, her wellingtons long abandoned since arthritis rendered them too uncomfortable. As we sat having tea in the shade of an apple tree I, almost for the first time, noticed her hands. Gnarled and twisted with age, wrapped around her walking stick as if rooted there, they were not only visually striking, they seemed also to be a poignant mark of the passage of her long life. She had wanted to be a musician, and played the piano beautifully, but in the 1900’s such things were frowned upon, so she was instead sent to the Slade where she became a fairly accomplished artist. She hated her hands now of course, but allowed me to take a photograph nevertheless.

When I later came to develop it, it instantly became my favourite portrait of my grandmother.
These hands had lived through two world wars, still wore the wedding ring for a husband dead for 39 years, had painted, played the piano every day until her fingers no longer behaved as she’d like, gardened extensively, chopped wood, cared for the sick, dressed and fed my departed father as well as myself and my siblings. Made the very best ginger beer, caught crayfish from the river, made countless pots of marmalade and quince jelly, played tennis for her county, and played a mean game of croquet. It seemed to me as if her life was woven into these hands, and so began a project that I can’t really imagine will ever end.

I took that first photograph on my old Nikon F2 with a lovely 55mm Macro lens on Tri-X, my favourite rather pithy and grainy black and white film back in the days before digital. I decided that for all my future hands portraits I should give myself certain parameters to work within. Always shoot in black and white, using only natural light, wherever and whenever is convenient for my subject, and to take no more than half an hour. There have certainly been a few times when these parameters have made the process rather more challenging than I would have liked, and a few when it meant that I just couldn’t get the shot, but I’ve found that more often than not, half an hour is plenty of time. When working with daylight you’re always in the lap of the gods, so you just have to do the best you can with what you’ve got, the UK’s not Florida. Sometimes the light’s muddy and flat, actually often it’s muddy and flat, or it’s flipping up and down like a yoyo as the sun dips in and out behind scudding clouds, other times it’s soft, steady and stunning, maybe I’m banging on about light too much. 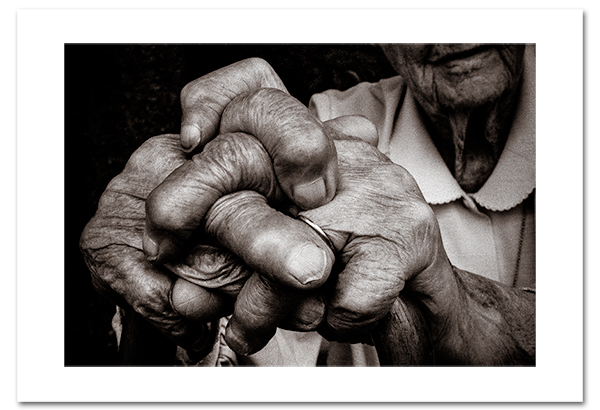 When I went back to show my grandmother the picture, she didn’t like it at all. I explained what I was planning to do, and she dug out an old print of Albrecht Dürer’s called Praying Hands which she thought I might like. I had of course seen it before, but had never really looked at it properly, and it cemented in me the concept that hands could be a beautiful and telling portrait in their own right, with no need for a face. Indeed the sitter’s face would be a distraction from the story told through their hands. After that hands seemed to come at me from all angles. I recalled the beautiful poems of Louis Aragon and e.e.cummings, Les Mains D’Elsa and ‘somewhere I have never travelled, gladly beyond’ with it’s wonderful line, “nobody, not even the rain, has such small hands”. I just began to notice hands everywhere, in art, literature, in films and on TV. Anyway, a casual observation and quick snap became a passion that is A Show of Hands.

I hope that at least some of the images in the collection succeed in being telling and beautiful portraits of those people who’ve been so kind as to give me their time, and let me photograph their hands. In the words of my eldest son (6) “But dad all these people do things that are much more difficult, you just photograph their hands”. Out of the minds of babes and sucklings…